Did Spiralling Cases on University Campuses Contribute to the Government’s Covid 19 Data Crash?

Reports that key Covid 19 data had been lost, as a result of a ‘spreadsheet crash’, were all across the news yesterday. And this latest twist in the test and trace tale uncovered some decidedly shaky systems.

But how much did an influx of new cases on university campuses contribute to this problem? And what does it tell us about the robustness of data - and government strategy?

How was the story first uncovered?

News broke late on Saturday evening about the scale of uncounted positive test results in England.  This followed an announcement that technical problems had caused a delay in publishing cases, on the government’s website (as below).

What caused the issue?

It emerged that test data had been stored on an Excel spreadsheet and over capacity had caused it to crash.  Matt Hancock explained, in the House of Commons, that there had also been a problem with ‘coordination of data in the system’.

What does the missing data tell us?

Analysts have been raking through the additional data, since it was released, and a number of key points have emerged.

Many of the missing results seem to come from the North, North West, North East and Midlands. These include wider regions where a range of local lockdowns have already been put in place. Early analyses also seem to draw some strong links to universities.

Looking at the table below, of the highest number, and largest rises in cases in the UK, a correlation is clear. Manchester University, in the city, and which tops both lists, recently confirmed 824 students and 18 staff had tested positive.  And Manchester Metropolitan (much in the news recently due to lockdowns), has had more than 1,700 students self-isolating in halls of residence. 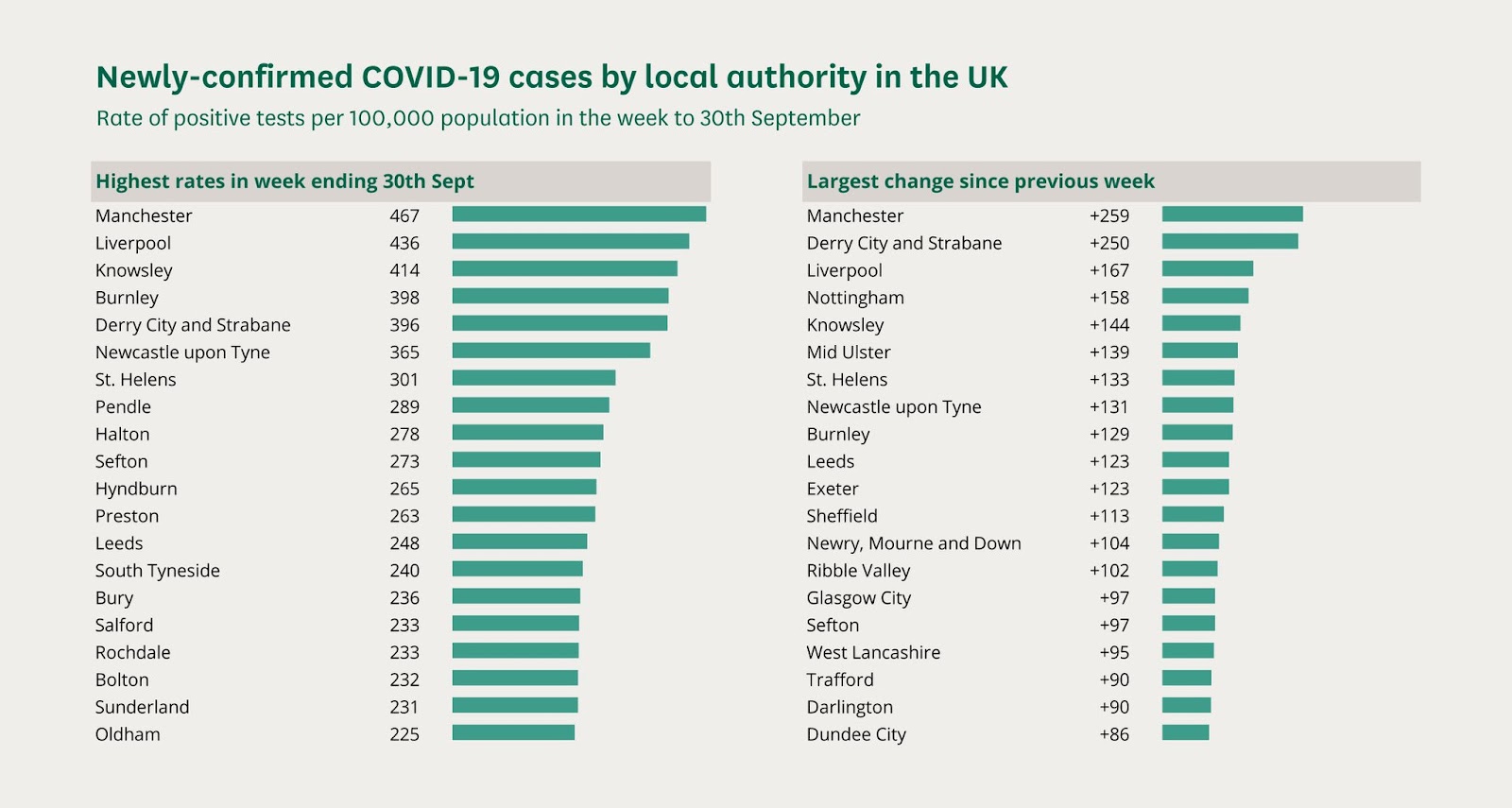 Derry, which has seen the second largest rise, may be unaffected by the loss of data.  But did recently open a mobile testing site on campus, due to concerns about rising cases. And Liverpool University (close to the top in both categories) had already reported 87 cases by 23 September.

Newcastle, which appears in both lists above, confirmed 770 positive tests at Northumbria University and 94 at Newcastle University. The city is, of course, already under local lockdown measures.

Areas not currently subject to lockdown in England

A ‘stand out’ in this group is Nottingham, which was not previously an area of concern. The city has shown the largest increase of any not currently subject to local lockdown. 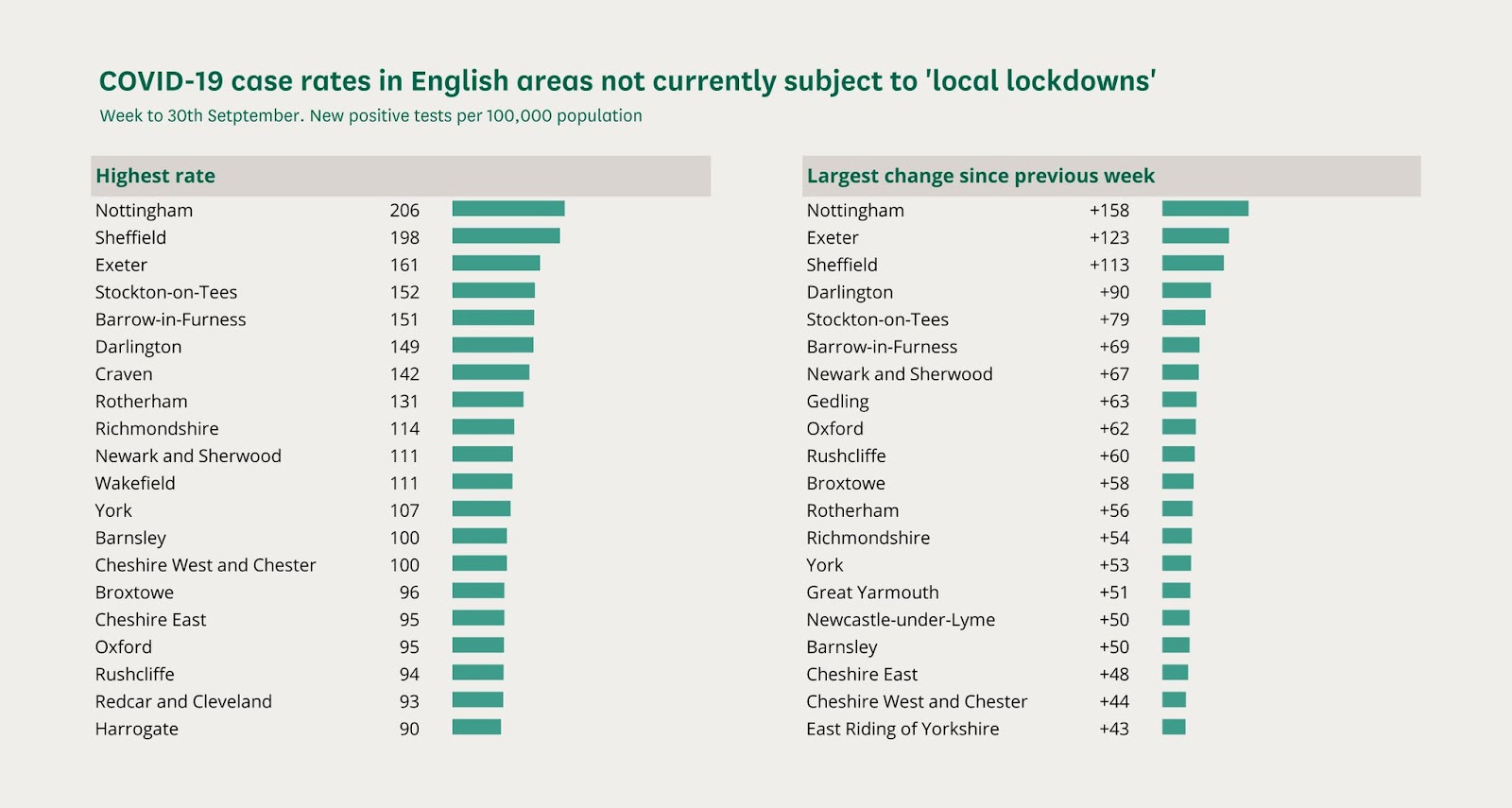 A quick look at the map below (also @carlbaker from @commonslibrary) shows a direct correlation between the city’s university campuses, student accommodation and Covid cases. 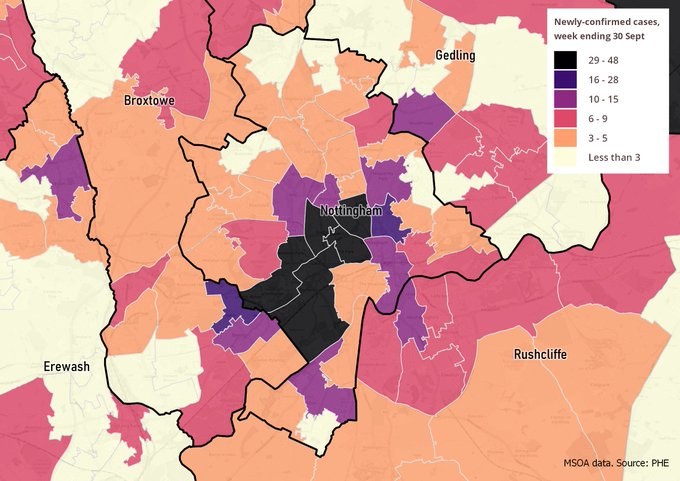 Another place of note is Sheffield, where the highest new numbers are also found in these areas. This comes as the University of Sheffield has reported a spike of almost 500 cases - and Sheffield Hallam 370. Concern is so high there that it has now been suggested all teaching is delivered online.

The worst hit part of the city appears to be Endcliffe and Ranmoor. This is a suburb which contains large numbers of purpose built student accommodation blocks. 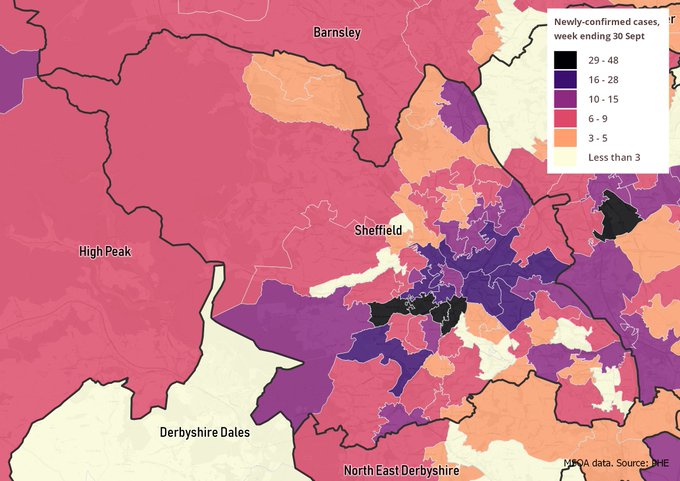 Away from the North, but again in the top three, Exeter’s cases also follow this pattern - with cases directly centred around the city’s university. 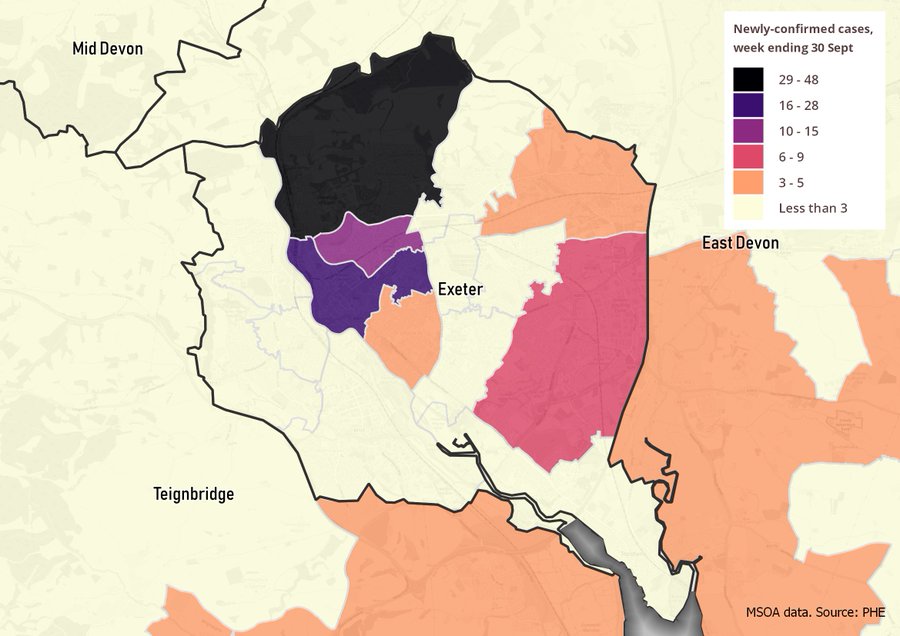 Did increased testing crash the system?

It’s interesting to note that Liverpool, Nottingham and Exeter (along with Oxford,, Falmouth, Cardiff, Birmingham and East Anglia) are all running their own testing programmes.  And so may be picking up quite a few asymptomatic test results. But this, in combination with on site services outsourced to a range of different private providers, certainly provides a fractured picture. Perhaps the pressure of all the additional testing, coupled with a complex set up has contributed to the problem.

There could also be cross-over with testing delays and backlogs more broadly in these areas. And a degree of catch up taking place. Certainly there is worrying activity beyond university cities and student areas, which also needs to be looked into.

What is clear is that the systems uncovered at the centre of this crisis don’t provide confidence in current data credibility. And government policy on encouraging students back to campus, as well as the outsourcing of contracts hasn’t helped.

The upcoming days will uncover more about what is behind these system failures. And how much has been caused by creating university related ‘hotspots’. What does already seem clear is how creaky our current test and trace programme really is right now. Which is worrying as we head into what could be a very difficult winter.