Over 1.3 million households face digital exclusion in the UK. And Covid 19 has made addressing this issue even more urgent.

Because unless everyone can get equal access to up to date information, and vital healthcare services, the consequences could be deadly serious.

Why should we be worried about the current situation?

Just think about how key information is being shared right now - and the ways most people communicate. Checking the guidance, booking a test - even accessing mutual aid.  Everything relies on being online, doesn’t it?

Yet around 10 % of Britain’s adult population can’t connect to the internet at all. And even more people’s access is very limited.  At the same time, lots of organisations - not least the government - act as if this divide doesn’t even exist. 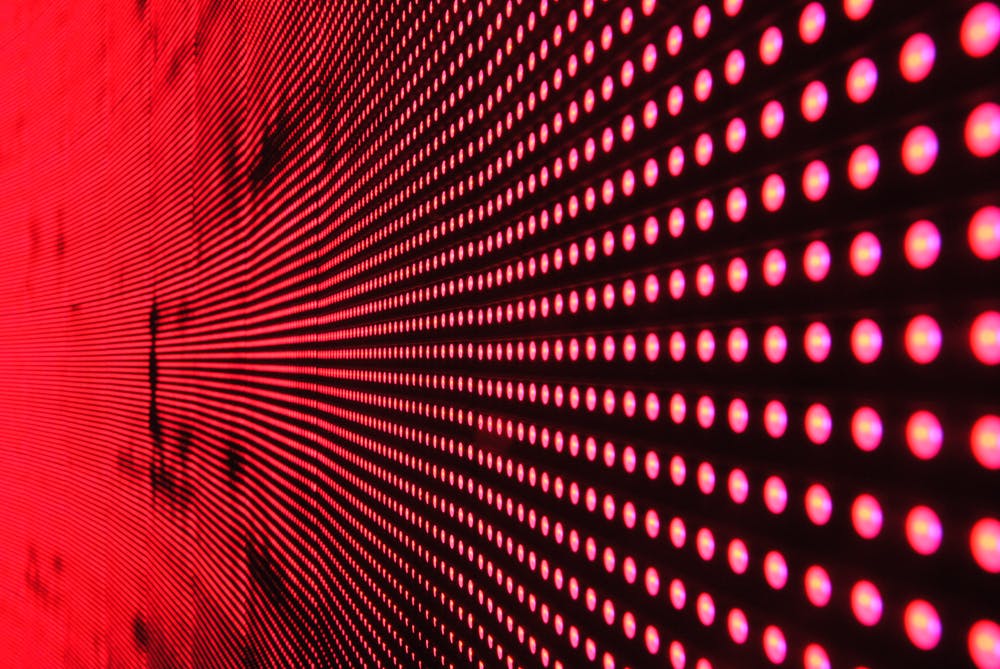 Take last month’s lockdown announcements across the North of England - which affected over 4 million people. The government sent out several late-night social media posts, announcing crucial changes that came into effect almost immediately.  Is that any way to communicate a key message in the middle of a pandemic?  Especially when the most ‘at risk’ groups might be completely excluded.

It shows more of a total disconnect on the part of the Conservatives...

How many people are internet non-users?

A 2019 report by the Office for National Statistics (ONS) revealed that, in 2018, there were 5·3 million internet non-users in the UK.  And, although numbers are declining, that’s still a huge amount of people. 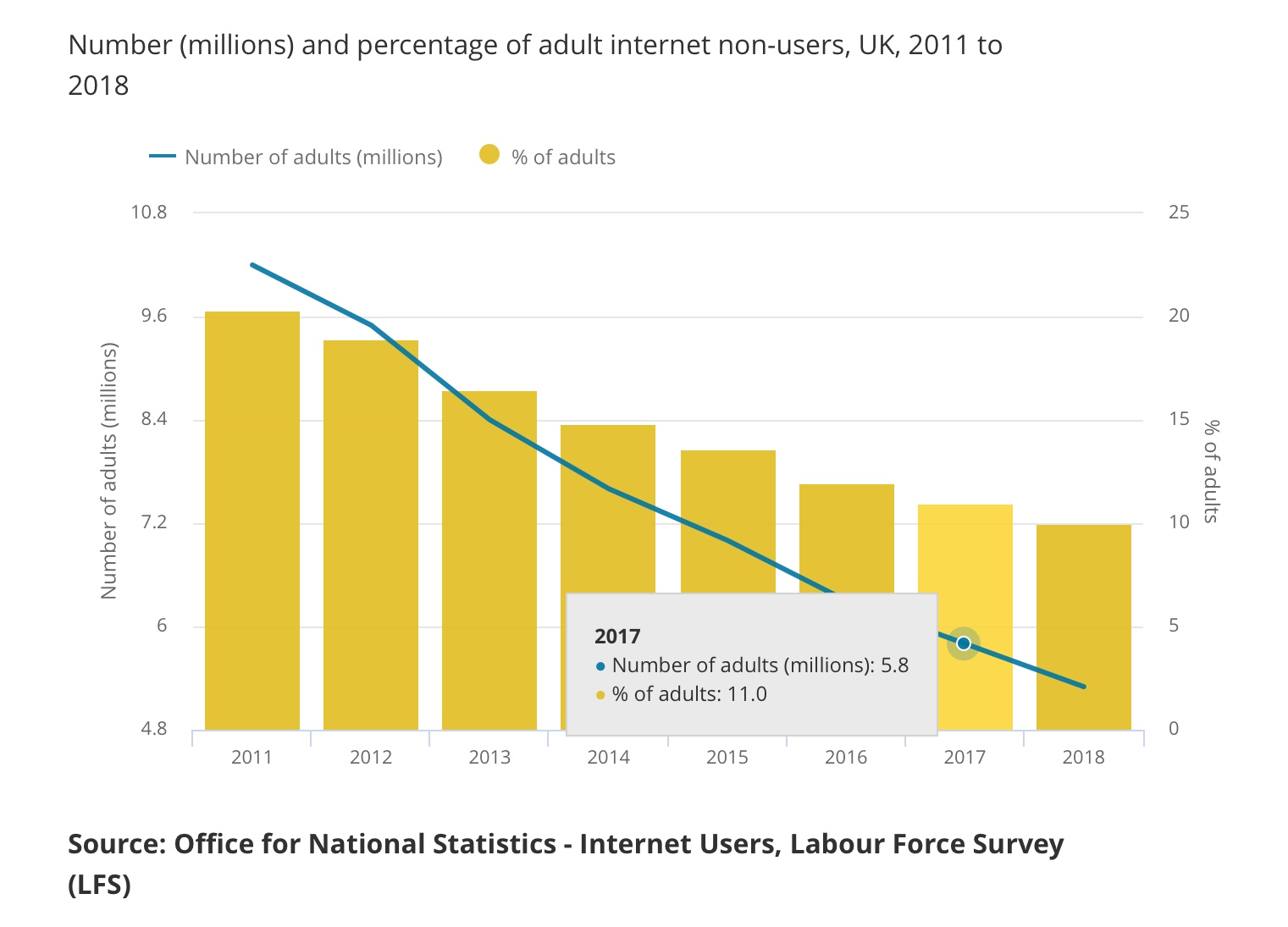 And, when you consider the groups hit hardest by Covid 19, the figures are even more worrying. The proportion of over 65’s who reported being non-users, for example, had increased. 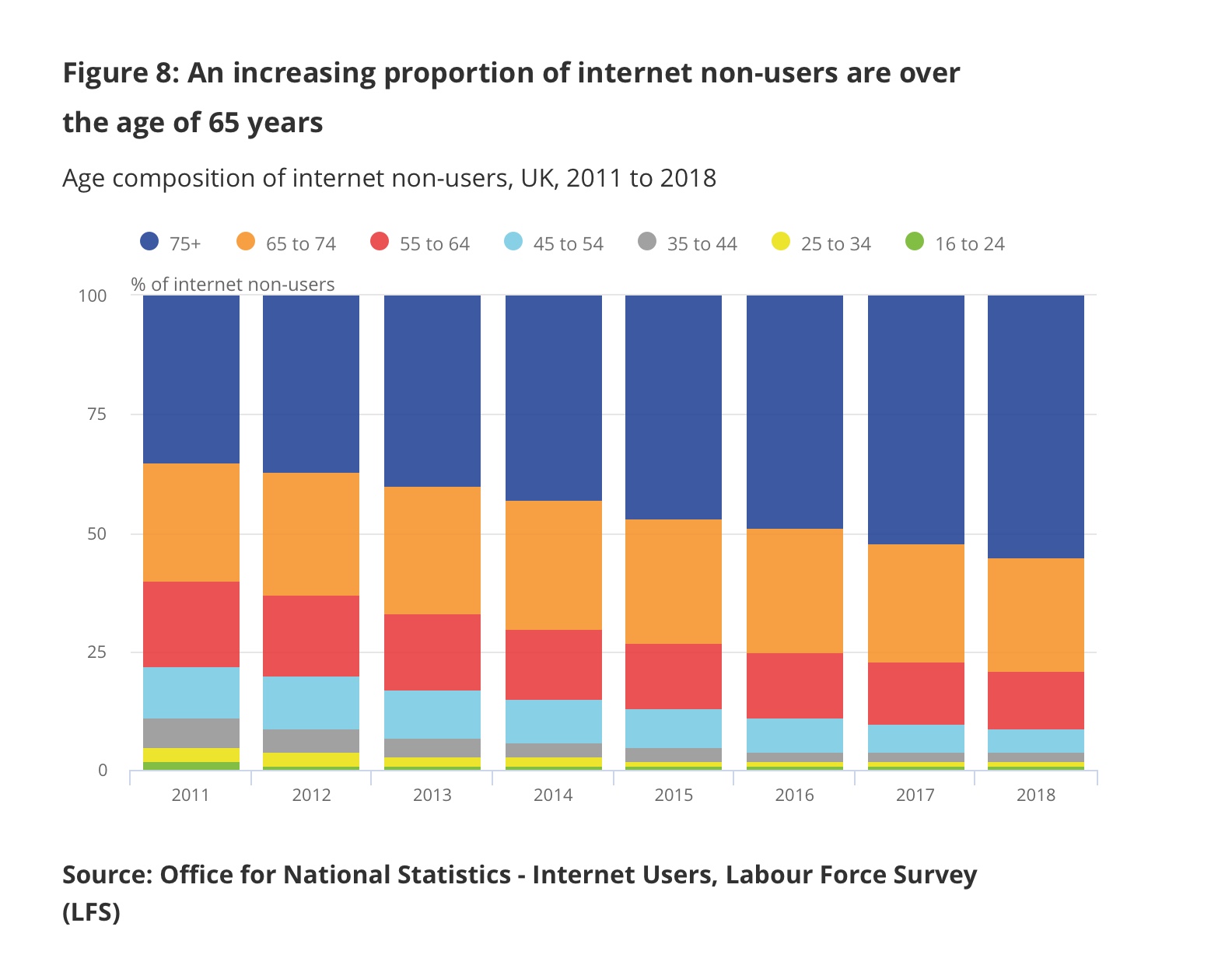 ‘We have elderly people who can’t get on council shielding lists because you have to register online. Others have ended up critically ill in hospital and have to beg to use a healthcare worker’s device just to make contact with their family.”

People with disabilities are also far more digitally excluded.  On top of facing a whole range of other barriers to accessing healthcare.

In 2018, this figure was 23.3%, compared with only 6.0% of the rest of the population. When you consider that disabled people are also disproportionately affected by the virus, it's clear this has to be addressed as a matter of urgency. 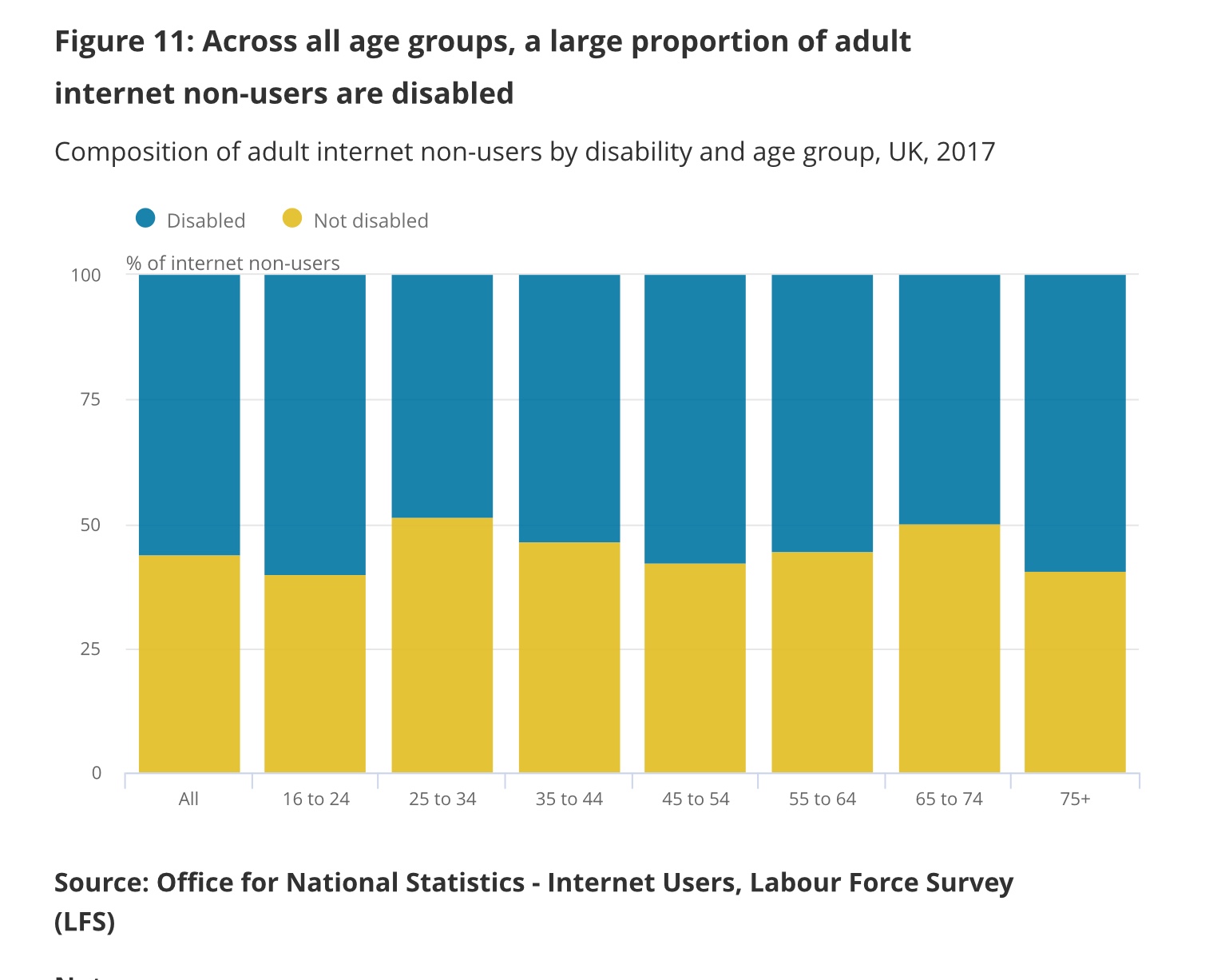 Discrepancies across ethnic groups have thankfully narrowed.  Particularly in people of Bangladeshi origin. In 2011, 31.4% were internet non-users - higher than the figure for UK adults overall (20.3%). In 2018, the figure had dropped down to 8.0%.

Gypsy, Roma, and Traveller communities; and people experiencing homelessness are still, however, at particular risk. 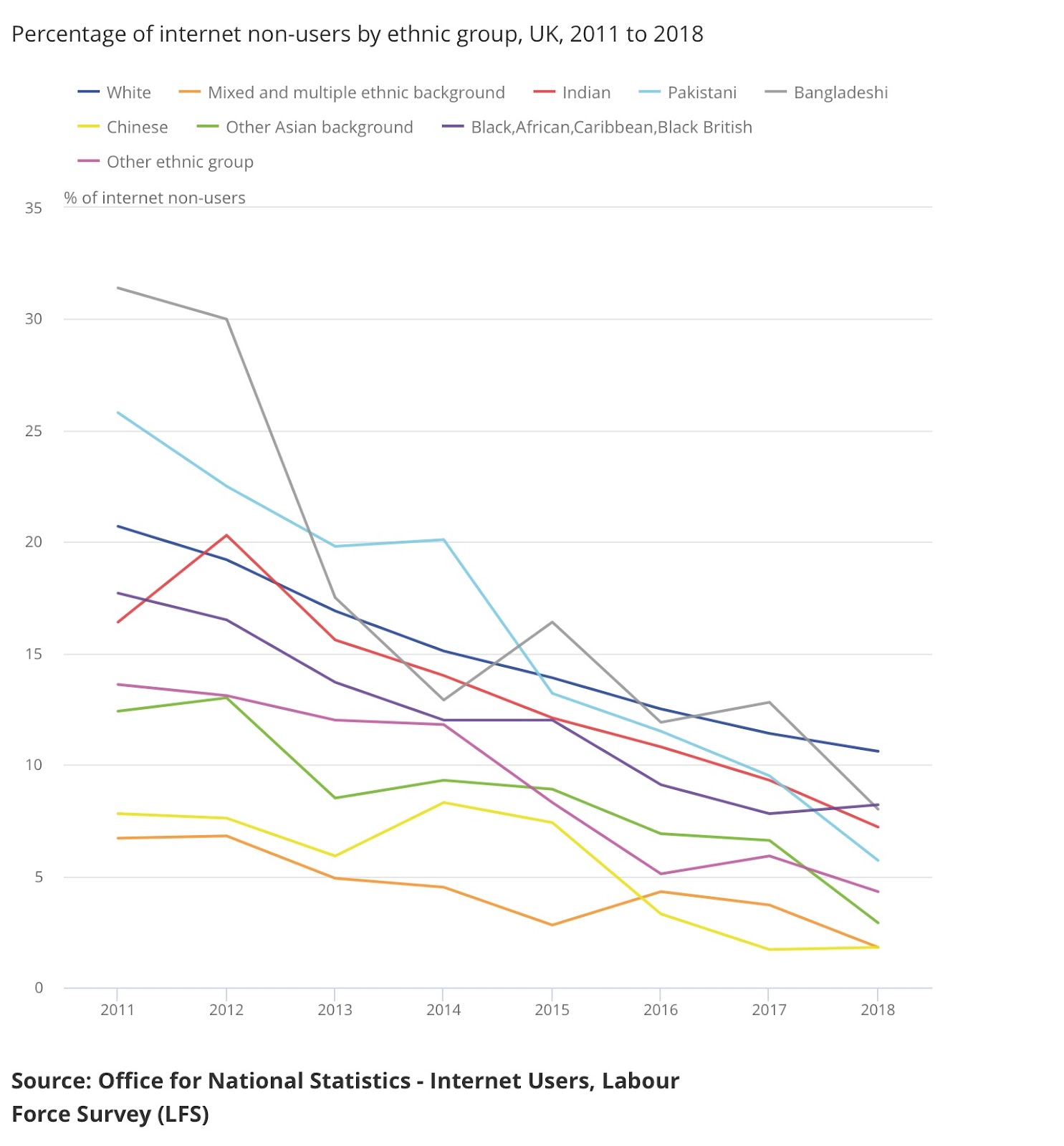 The cost of pay as you go (PAYG) data is prohibitive

But it’s not just these factors, in isolation, that are the issue. Or even the price of a device itself. Getting online can be extremely costly - especially when you’re on a very low income.

Pay as you go data, which many people rely on, is much more expensive than fixed-line broadband.  And there’s a strong correlation between income level and internet connection - as can be seen in the graph below. 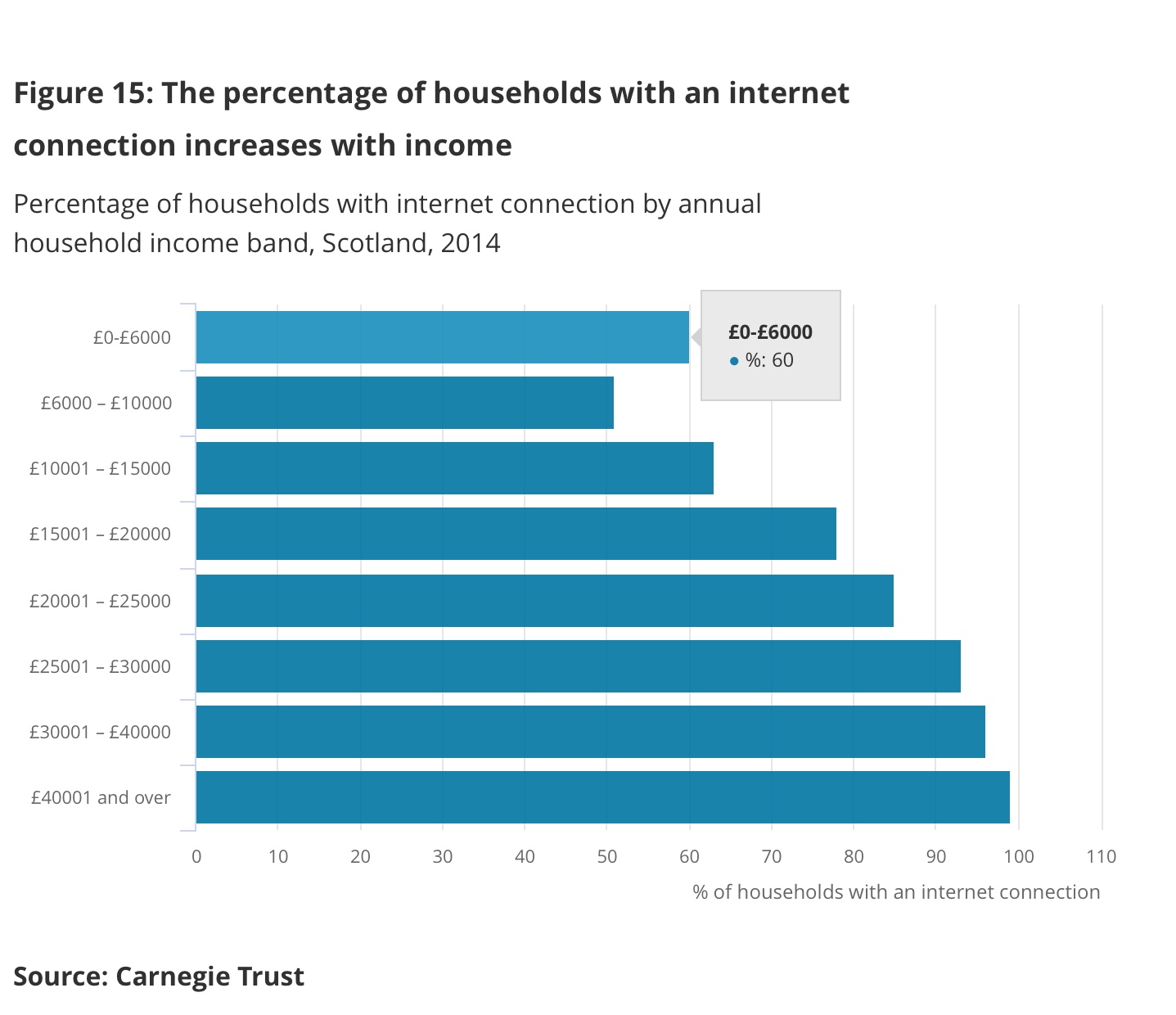 To put the cost of PAYG into context, one woman reported to The Guardian the stark choice she’d had to make between data and food. The impact of her teenage daughter’s online homeschooling meant almost half her weekly budget was going on top ups.

But in the sixth richest country in the world, surely no-one should face that kind of dilemma.

And yes - the main internet providers might well have agreed to remove data caps during the pandemic. But that doesn’t help 25.9 million pay as you go customers.

What’s worse is it’s often those facing multiple life challenges who are most impacted. In Manchester, for example, a community network said almost 75% of the 1,000 women they support rely solely on PAYG.  Including those affected by domestic violence and abuse.

And the Happy Baby Community, a group working with asylum seekers and victims of trafficking, said it has struggled to keep pregnant women and new mothers connected to vital healthcare services.

So this is a really serious situation...

Libraries and online learning centres have been closed

Of course, the closure of libraries and online learning centres during lockdown hasn’t helped this situation. Kira Allmann, Research Fellow in Media Law and Policy at Oxford University's Centre for Socio-Legal Studies said recently to ‘The Lancet:

'These are so important for people without access to digital technology or with low digital skills.” Their role in ‘the front line’ of the struggle to overcome the digital divide is currently being lost'. 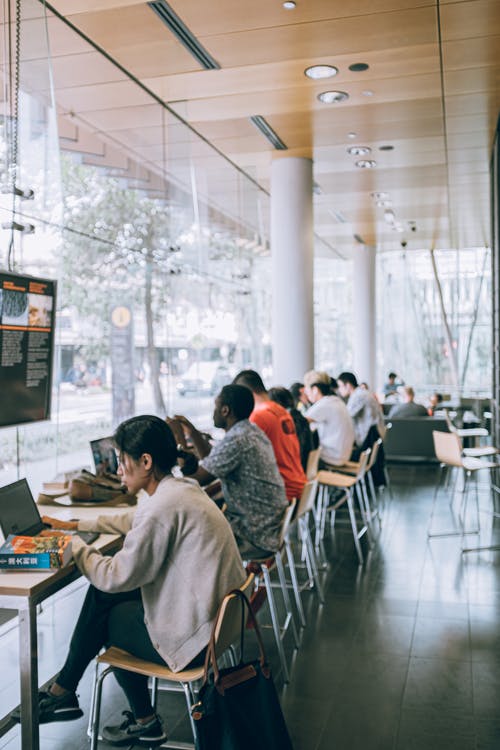 So what is the solution? Tackling poverty is obviously the key factor. Because this is yet another example of our ever increasingly two tier society.

Labour’s manifesto pledge to provide free broadband could have been a real game-changer.  And this type of approach will surely have to be part of any fair way forward.  No-one should ever be left behind or left out, after all, because they can’t afford internet access

In the meantime, every organisation, including the government must remember the digital divide when it plans its communications.  And healthcare providers need to prioritise face to face appointments and/or other methods of connecting with our most ‘at risk’ residents.

Everything possible also has to be done to break down the divide more broadly. Supporting key charities and promoting digital awareness are all part of a holistic response. As is championing libraries, community centres and other education settings for their role in providing digital access - as they reopen.

This situation is only likely to get worse this Winter unless we take action. And the consequences of that could be deadly serious.