Are Young People Really Responsible for the Recent Rise in Covid 19 Cases?

The government has blamed young people for a reported rise in Coronavirus cases. And attributed it to this age group’s lack of adherence to the guidelines.

But is there really any strong data to substantiate that claim? We decided to look into these statements more closely…

To begin with, we re-examined slides from the Government’s 9 September Press Conference. These were based on the most recent data provided by Public Health England (PHE). 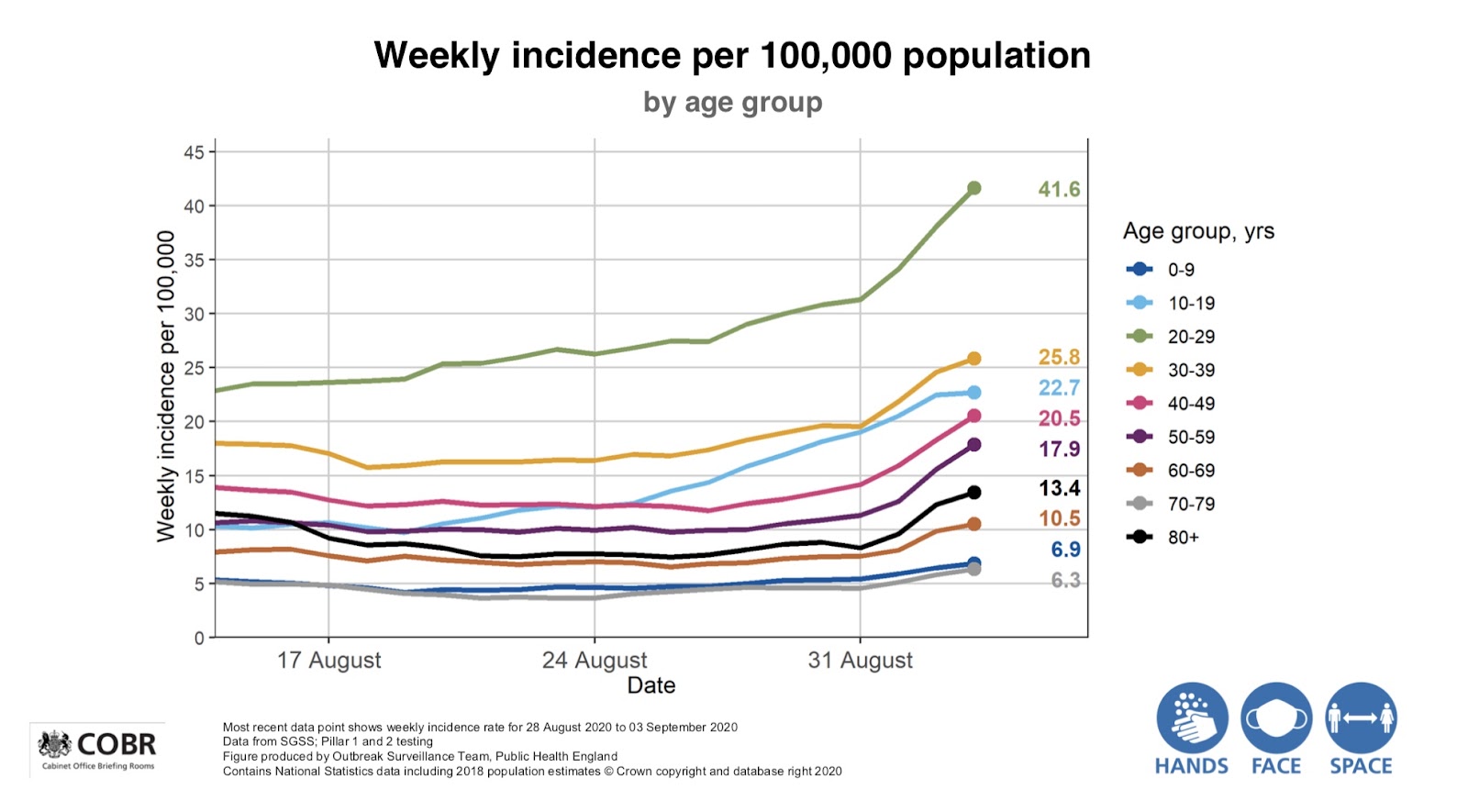 This doesn’t fit entirely with the government’s narrative that 18-24 year olds should be singled out. And the data seems more indicative of a worrying increase across most of the population. The biggest problem though is knowing exactly how representative the figures really are. 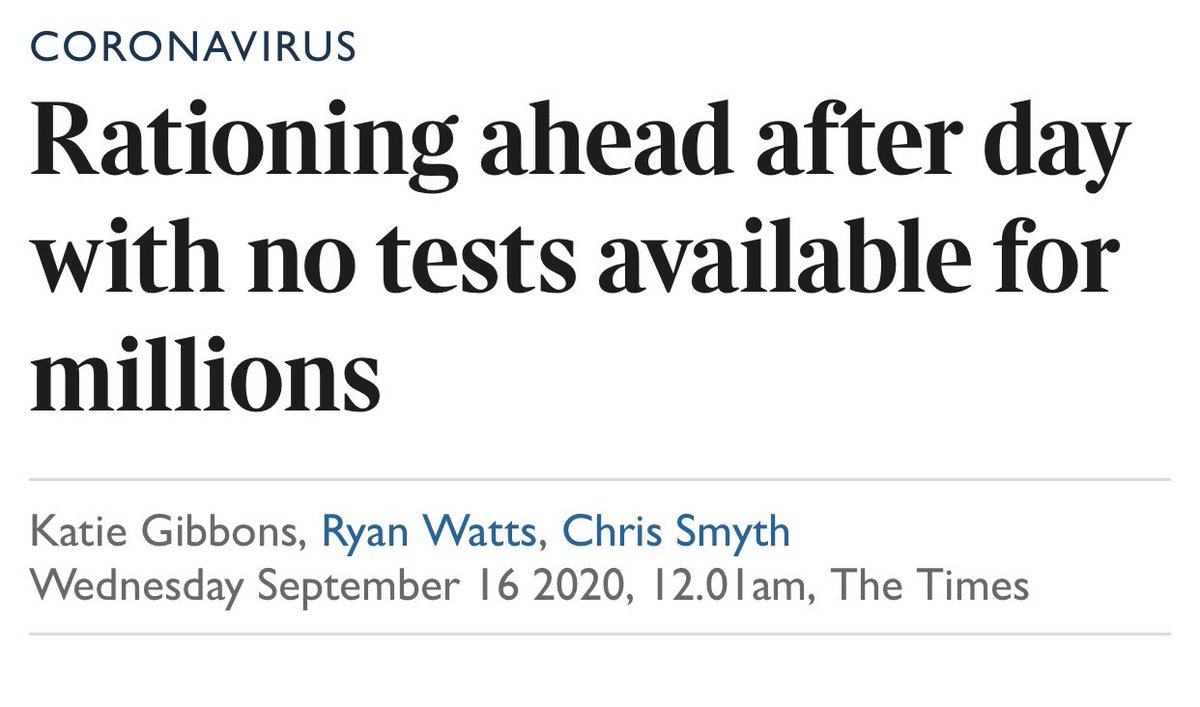 PHE statistics are based solely on results from symptomatic people.  And even this group is struggling to get tested at all at the moment. Our perceptions are always based on a skewed sample - because of this.  And until, or if ever, widespread testing is available, that won’t be resolved.

The REACT-1 study, which takes swabs from random samples of people, does help in this respect.  Because this provides a better picture of the pattern of infection across the population.

The team’s latest report corroborates PHE’s findings that the highest case numbers are seen in the younger age bracket. But all groups, with the exception of those over 65, showed a significant rise too. During the period 22 August to 7 September, for example, prevalence doubled every 7.7 days (about twice the rate seen back in July).

Almost two-thirds of those who tested positive had no symptoms at the time, or in the seven days before. So they wouldn’t have been picked up by the government’s current testing programme. 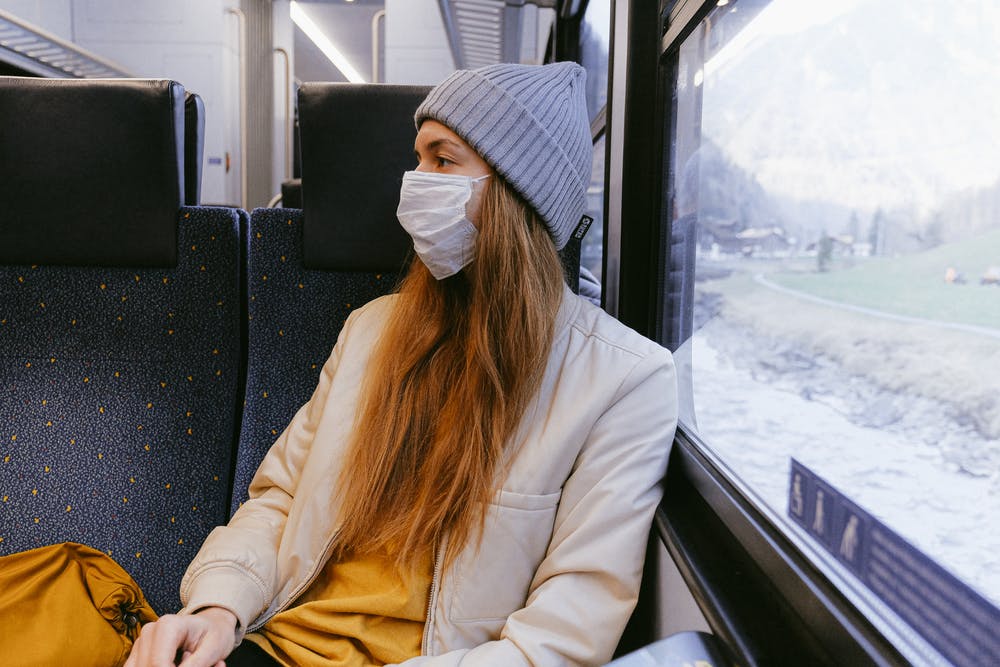 Importantly, a very clear link was confirmed between the BAME population and increased prevalence. And this was no longer connected to key worker/non key worker status.

The REACT team’s report highlighted concerns about infection levels in the North and Midlands. And it didn’t seem to substantiate government claims of a link with ‘affluent’ people.

This rings some alarm bells about the way public health information is being communicated.

Have our perceptions of infection patterns always been flawed?

Our perceptions of infection patterns have been primarily based on two things: admission to hospital - and current death rates. But this means we may have underestimated the scale of other asymptomatic cases.

The random sample tested by REACT-1, back in May, for example, already showed 18-24’s as most likely to be infected. 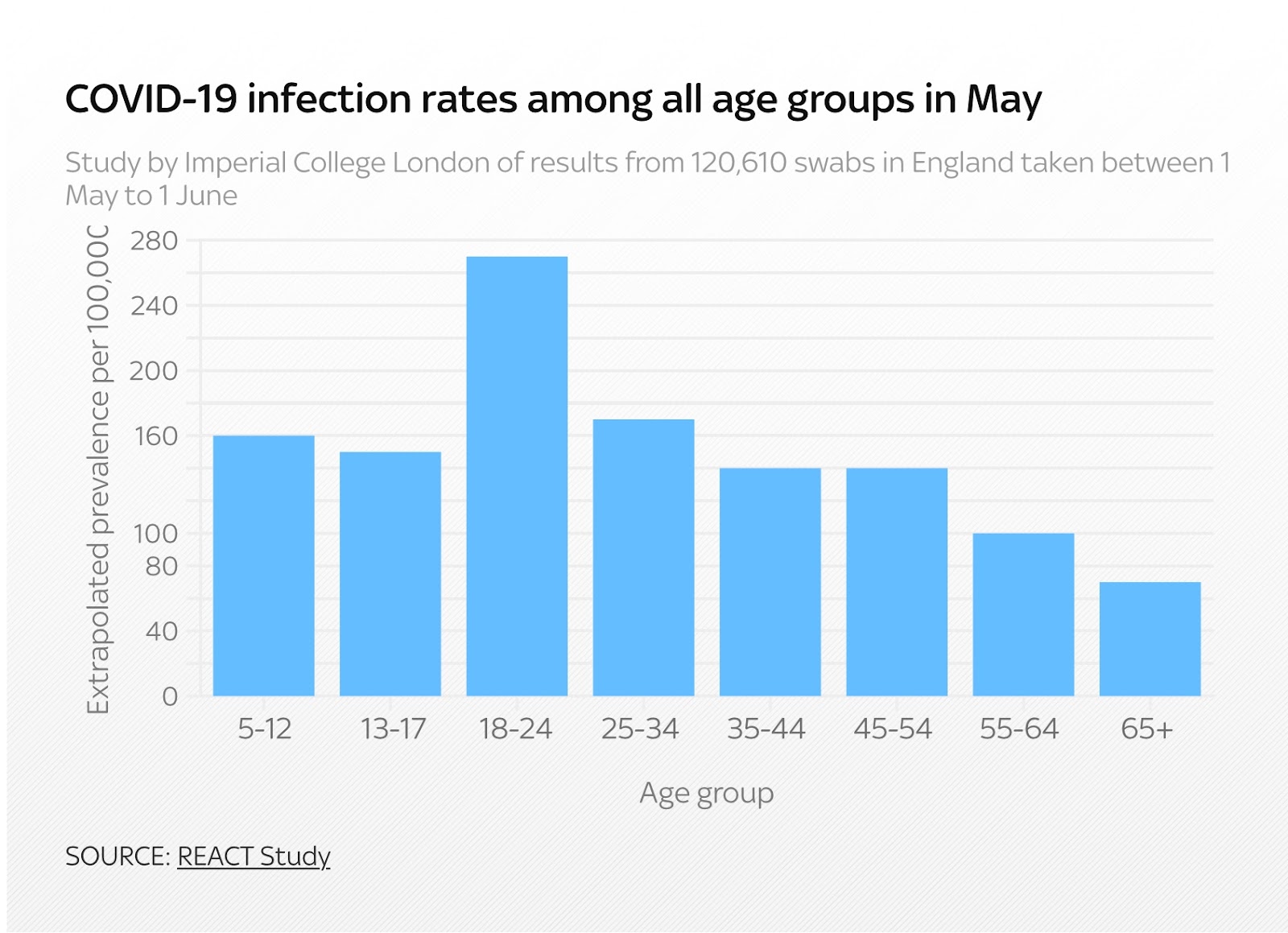 But as they rarely appeared in hospital and death figures - and generally weren’t tested - that wasn’t reported. This makes our understanding of the progression of the virus in this age group really problematic.

The latest figures are still worrying

That’s not to dismiss recent announcements - or suggest the numbers aren’t concerning.  As we’ve seen in the US, across Europe and in the UK too, it can all be part of a worrying pattern.

As this graph of infections In Florida from earlier in the summer shows - cases follow a cumulative pattern. Once they rise in a younger age group, others soon follow suit, We saw this with early infections in Britain (including in Brighton). 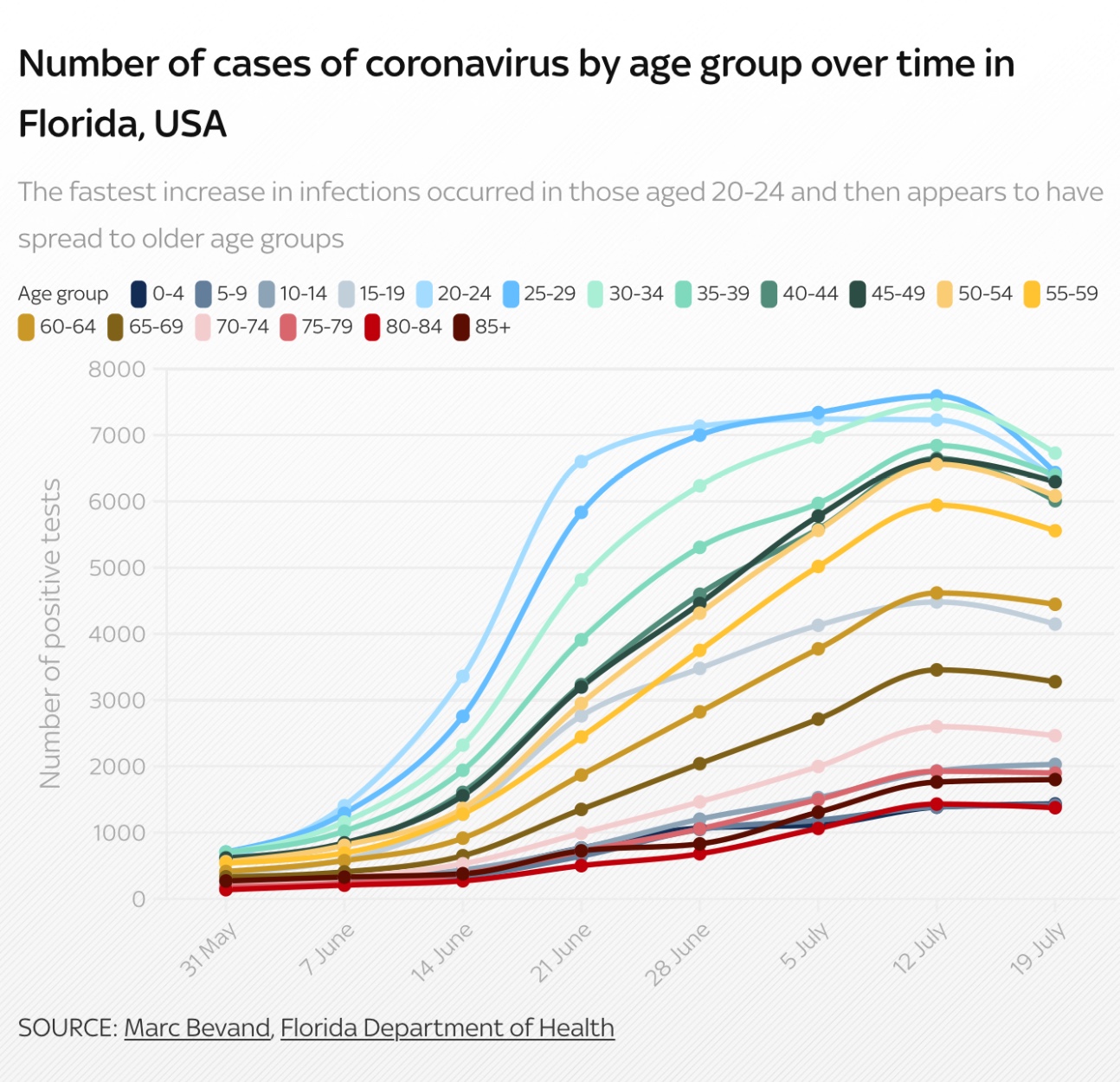 Reminding young people, then, about following guidelines is important. It’s just not the whole story.  And, without a more reliable narrative about infection rates, we’re not really able to read what that is.

Why might cases in the 18-24 age bracket be generally high?

18-24’s tend to have more contacts, for one thing. And they use public transport the most, which exacerbates the problem.

Here in the UK, of course, they’ve also received a real set of mixed messages.

In the run up to recent statements, we’d eased lockdown, enjoyed ‘Super Saturday’.  And many young people had been encouraged back to their worksites. Boris Johnson even warned office based workers they might lose their job otherwise.

The government also urged young people to help restart the economy, travel and take part in their ‘Eat Out to Help Out’ (EOHO) scheme.

This saw restaurant dining figures shoot up - as shown in the OpenTable data below. And, of course, 18 - 24 year olds were also most likely to be employed in these establishments. 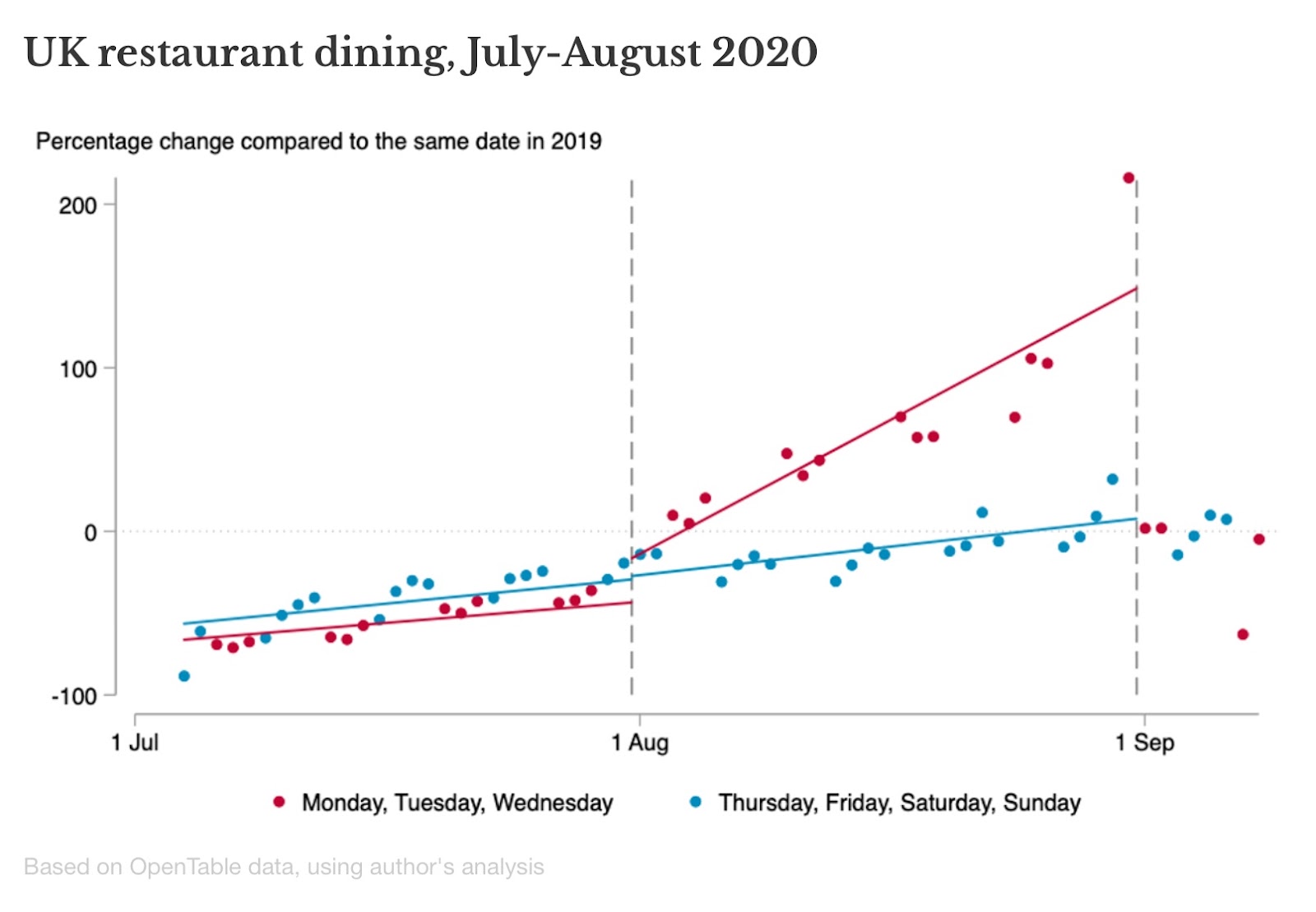 One Policy Researcher at the University of Oxford, who reported on the link between EOHO and spikes in cases produced the (below) graph which does demonstrate a connection. 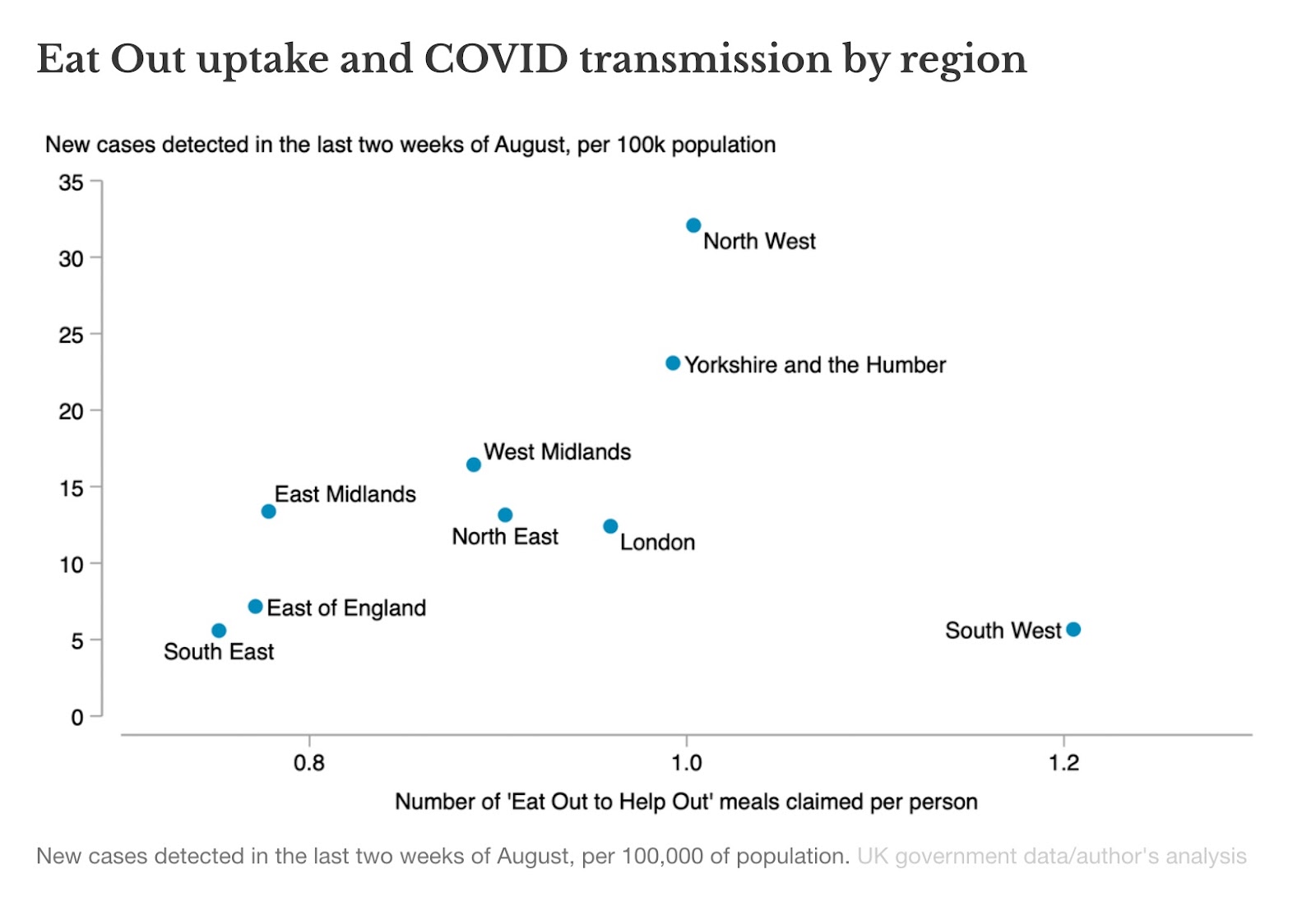 What we do know is that the virus ticked up throughout the duration of EOHO.  And that the initiative saw a 61% average rise in restaurant bookings compared with the same days last year. On the final day, this peaked at 216%.

The fact that 1 in 4 of the population took part suggests there were broader groups than 18-24’s out socialising. And it’s possible the rise in positive tests among young people is, in part, due to subsequent contacts. We may, in fact, have picked up more asymptomatic infections in this age bracket. As well as EOHO, in itself, increasing virus spread.

What part did other government messaging play?

Communications have highlighted the low numbers of deaths in young people. And gave many a strong impression that their own behaviour was ‘risk free’.

More effective key messaging could have focused on the role we all play in a public health crisis.  But government information throughout the pandemic has been conflicting - at best.

So is it right to say young people are somehow responsible for the rise in infections?  Many health professionals are against this.  Over 50 psychologists signed a letter to Matt Hancock about the damage his statements could cause. And suggested they might even make them abandon social distancing altogether.

The reality is that current numbers are very concerning, but we don’t have strong enough comparative data. And until the government gets on top of the testing system, this situation isn’t likely to improve. The general pattern seems to be of case numbers across most demographics increasing sharply - so that might have been a better message to communicate.

What we are certain of though is that division is not helpful in the middle of a pandemic. And the government cannot continually deflect its mistakes onto others.

It must put its own house in order - including on public health messaging. Then do everything possible to bring people, across all age groups, together.